I recently knit another Scraps Chaps bunny (Ravelry, Etsy) and decided to try something a little different for the bum. I don't usually mind sewing up that part of the toy, but I know some of you hate seaming. So I redesigned the nether bit of the toy, so it's easier to knit in the round, and there's no seam. The first photo below shows the original version, and the second photo shows the redesigned bum. The knitting instructions follow, and the abbreviations are the same as you will find at the end of your pattern. 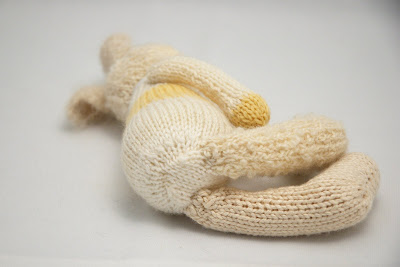 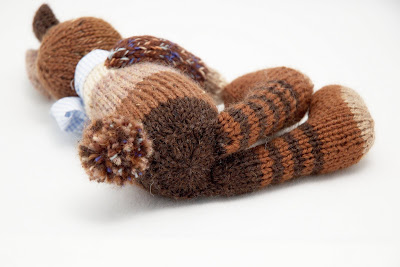 as per instructions given below

Thanks so much to everyone who left a comment for my Mama Day give-away! I decided to draw one name for every 10 comments. Because many people left comments on Facebook instead of the actual blog post, I've added those names at the end of the list from the previous post. I've just drawn 5 random numbers:

And the names of those commenters are the following:

You each win a PDF copy of the toy pattern of your choice (the pattern books are not included). You can look on Ravelry or Etsy if you're not sure which one you'd like. I'll need your email address to send you the pattern, but I'll try contacting you directly once this is posted. If you don't hear from me soon, please contact me (barbara at fuzzymitten dot com).

I was chatting with my girl-friends the other day about mothers and mothers' day (which is this Sunday in Canada). Throughout the conversation, I kept remembering little stories about all the cute or funny things Lev has done lately. One of my friends exclaimed, "Now I get why people have kids! They're lots of fun!" It's true that some parts have been difficult, frustrating, exhausting, and even scary (especially when he started climbing things) - and he's only a year and a half! But I believe I have laughed more in that time than I have since I was a kid. I love him to pieces, and I'm so lucky to be his Mama (or Mam, as he calls me). Reading with my mom. I'm in the purple PJ's, and about 6 years old.
Sadly, I've forgotten to send my Mom anything, but hopefully a long phone-call will help. We don't talk as much as I'd like, since she works odd hours, and there's a 3 hour time difference between us. One of the things I love most about my Mom is all the things she taught me over the years. Reading first, then sewing and embroidery, plus cooking and baking. She was also my Girl Guide leader, and was always challenging me to learn more about all kinds of things there. I wish I'd nagged her more to teach me knitting, as I wonder how far ahead I would be with another 15-20 years experience, but at least it's now a hobby we can enjoy together. 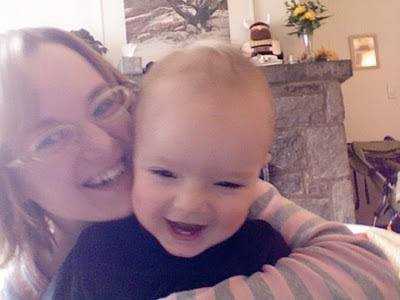 Taken with the camera on my laptop, about a month ago.
We haven't made any plans to celebrate Mother's Day in our little family, but I think a trip to a greenhouse for plants to fill my flower boxes would be just right (wink wink). To continue my earlier story, I came home from visiting my friends, to discover Mr. Mitten working on a super special gift for me (he has a little talent that he doesn't practice enough). I was so surprised and overwhelmed I got a little teary. Maybe he'll let me share the drawing once he's finished. To celebrate Mothers everywhere, the things they teach us, and the laughter they share with us, I'm running a little give-away. You just need to leave a brief comment sharing something you love about your Mother, or about being a Mother. On Sunday morning (May 9), I'll draw some names, and the winners will receive a free pattern of their choice*.  It will help if you leave your email address or Ravelry name with your comment, but if you don't want to do that, check back here to see if you won.

*If you happen to have all the patterns you'd like, I'd happily send the free pattern as a gift to whomever you choose.
Posted by Barbara Prime at 7:27 a.m. 25 comments:

bit of this and that

That was a long and not really intentional blog break! Mr. Mitten had 2 weeks off from work to help out with a bunch of projects we needed to do around the house. I was so busy helping him, and running around after Lev, I didn't even get on the computer most days. Added to that was an injury to my wrist which kept me away from knitting for more than a week, so I didn't have much to share with you in that way. It's feeling a bit better now, but I'm taking it slow because I really, really don't want to get tendinitis. That would be a quick end to my career as a knitting designer!

In good news, my garden is growing well, I got some sewing projects done, and I've spent lots of time just playing with Lev. He loves the outside as much as I did as a kid, so it's going to be a fun summer!

These tulips are called "Apricot Beauty" and the colour has been stunning and so much more than I expected. They started out pale apricot (like in the photo), and have deepened to dark orange with dark pink mid-ribs. They are also giant tulips, so the flowers are waist high, and longer than my hands! The jonquils I planted for a bit more colour, and their delicious scent. I'm glad I planted them just outside our living-room window. One of the sewing projects I completed was a set of quilted cushion covers. The little tree squares are made from this tutorial (no mods), and I found them quite easy to put together, and very satisfying! I've only done a tiny bit of quilting before, even though I've been sewing garments since I was a kid. This was a great project to learn more about piecing something more complex than squares and rectangles. And here's a couple pictures of my little cutie. Although, he's really getting quite big! He's into full-on toddlerhood now, running everywhere, climbing everything (or trying to), and getting into everything! He's slowly picking up more words and concepts, but I'm trying to enjoy this stage, as I know once the talking starts, it won't stop until he's a teen. His personality is definitely developing as well, with a bit of Mama and Dada, and lots of himself. He's goofy and playful, friendly and easygoing, but also serious and thoughtful when he's trying to learn something.