First I want to thank everyone who left a suggestion for the holiday pattern. They were all great ideas, and I definitely want to work on some of the others I didn't get to this year (especially the merry wombat! I tried, but it needs more work than I had time for).

In the end, I decided on making the Eskimo, or Inuk, and a baby seal (which was suggested by Mr. Mitten when I couldn't get the merry wombat to turn out right). Below you'll find the instructions for both, with the abbreviations following, if you're unfamiliar with some of the terms. I hope to get the pattern published as a PDF as soon as Mr. Mitten has time to help. 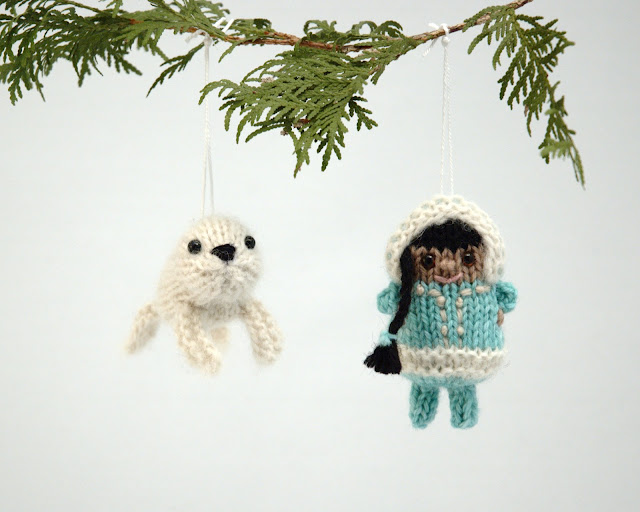 I've tried to design these toys to be simple and fast, so you can make a set in an evening. I've designed them in worsted weight yarn because I always have lots around, but you can easily knit them in a different weight with appropriate sized needles. (Note: changing to finer yarn will make the toys appear slimmer, changing to thicker yarn will make the toys appear plumper). The pattern is advanced beginner to intermediate level, and you will need to know how to knit, purl, increase, decrease, change yarns, make bobbles, work I-cord, and sew seams. However, these all make the toys fun and interesting to knit, and small toys are a great way to learn new skills!

Legs (make 2)
CO 5 sts with MC yarn onto one double pointed needle. Work I-cord for 4 rounds. Bind off. Sew the bound-off edge of legs to bottom of Inuk. Weave in all yarn ends. 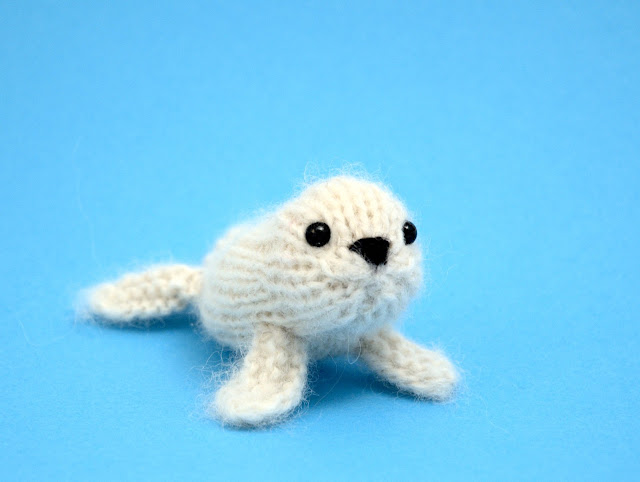 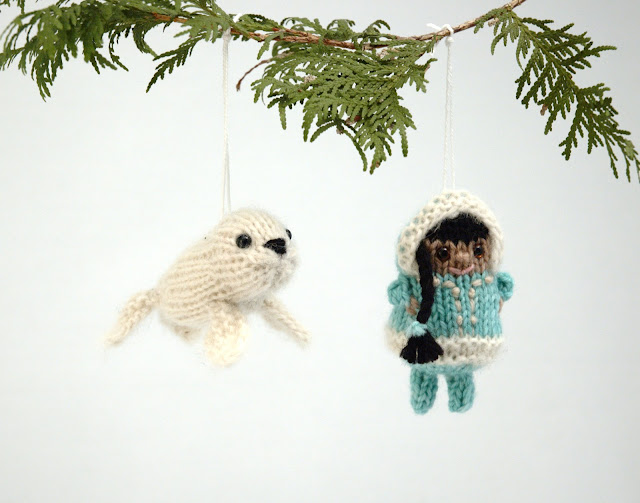 Abbreviations
[ ] x N = repeat sequence in brackets N times ("to end" means to repeat until the end of the row)
CO = cast on
K or k = knit
k2tog = decrease 1 by knitting 2 together
k3tog = knit 3 together, same technique as k2tog
kfbf = increase 2 by knitting into front, then back, then front of next stitch
m1 = increase 1 by picking up loop between stitch just worked and next stitch, and knit into the back of this loop
mb = make bobble: kfbf, turn, p3, turn, k3, turn, p3, turn, k3tog. You should start and end with 1 st. (there are many ways to make bobbles. If you need help, search for a tutorial that makes sense to you)
P or p = purl
p2tog = decrease 1 by purling 2 stitches together
ssk = decrease 1 by slipping 2 stitches as if to purl, transfer slipped stitches back to left needle, then knit slipped sts together
st or sts = stitch or stitches
st st = stocking stitch
Posted by Barbara Prime at 12:30 a.m. 11 comments: 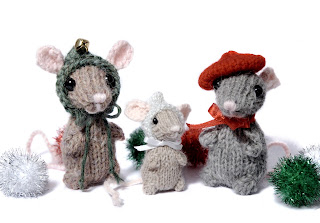 With no time to spare, I've added a few Holiday Mice kits to my Etsy shop. For $10 US you get all the materials you'll need to make two 3" mice: wool yarn, stuffing, eyes, and embellishments. You'll just need the right size knitting needles and a tapestry needle. A printed copy of the pattern costs $1 extra, since I assume most people will be happy to download it and print it themselves (also saves on shipping). I hope you enjoy making or giving these little gifts! 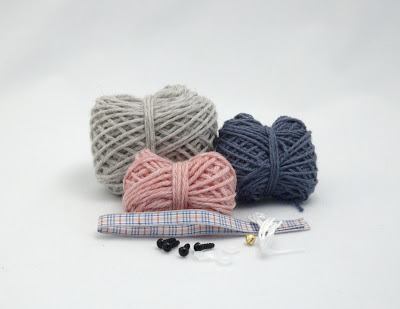 Kit in grey and blue
Posted by Barbara Prime at 1:04 p.m. No comments:

Do you still have time to fit in one or two little holiday knitting projects? Of course you do! Or perhaps you'd like to gift a pattern to someone who likes to knit cute toys? Starting November 22 and running until November 30 (eastern time in Canada), there will be a Happy Holidays Sale in my Ravelry shop! But even if you decide not to use the coupon, I have a new holiday pattern for you which should be ready very soon!

In the past I've published a few free patterns for holiday decorations, mostly because they're quick, fun projects that are even better when shared. The most popular by far was the Holiday Mice pattern, and I haven't even tried to top that one since it was published. However, I'm feeling like I want to do something this year, but I'm a bit short of inspiration.

I had a quick browse through Ravelry, and goodness! If you wanted to knit a stocking or tiny pullover, you could keep your needles busy for the rest of your life and not run out of patterns. There are also a number of very cute snowmen, birds, gingerbread men, Santa/elves, trees, and acorns. So what does that leave? I have no idea, which is why I thought I might ask what you would like to knit this year.

I can't promise to design anything that is suggested, and I certainly can't promise to design all of them! (Just wanted to write that, as there's been confusion in the past) But if you have a great idea that you think I could make something out of, please leave a comment! Perhaps if we all put our heads together, I can come up with a great design for you.
Posted by Barbara Prime at 10:14 a.m. 22 comments: 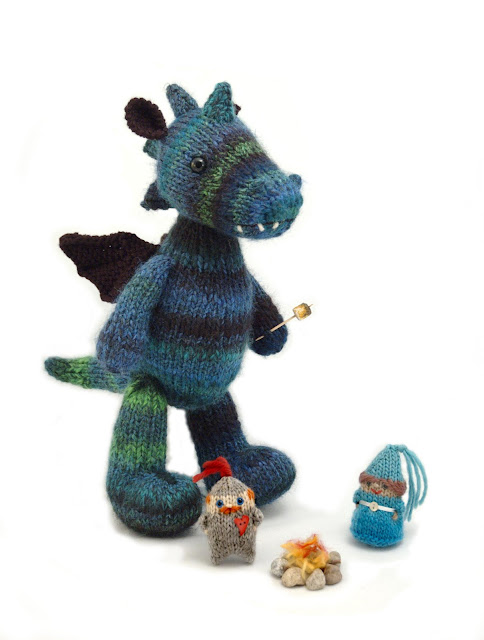